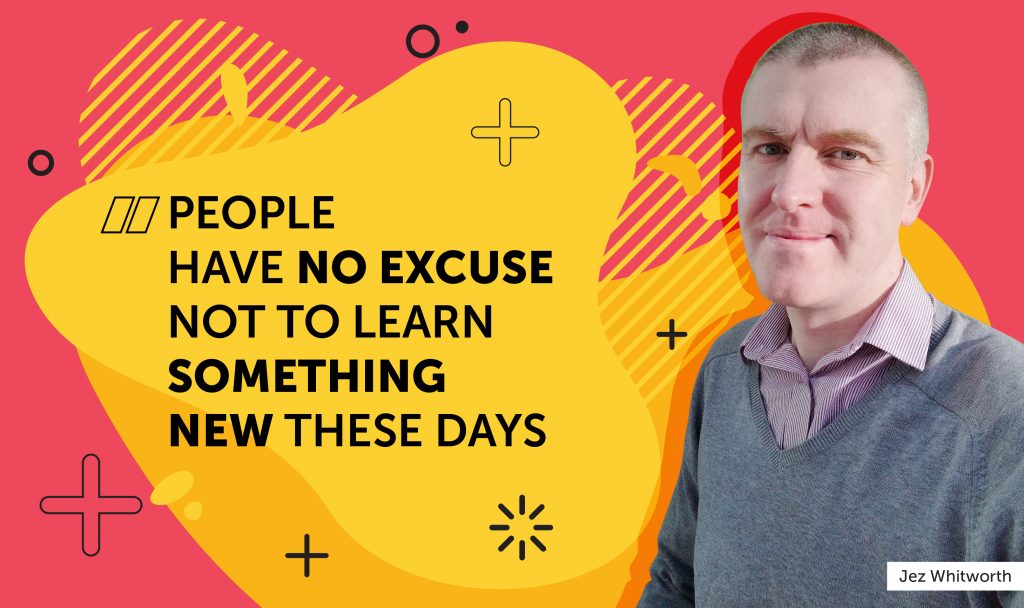 Jez Whitworth, our Digital Skills Instructor, has recently given an inspiring TED Talk on creative coding in Salisbury. Jez talked about a personal assistant he initially built on Raspberry Pi and how it evolved into an app used to teach coding, complete art installations and assist stroke victims’ recovery through typing exercises. We at TeachPitch were really curious to know more about this project and its further applications in education and healthcare sectors. Jez warmly welcomed our interest and shared his experiences.

Jez Whitworth gained qualifications in art, design and computing. With a background in software development, his IT skills have come in handy to deliver creative and fun lessons for all ages and abilities. Jez is the head of Computer Science at an independent school in Salisbury and teaches the GCSE Computer Science syllabus. He is also in charge of training teachers to implement new technology in their classrooms. In addition, Jez set up First Coding where kids and teenagers take coding lessons.

A couple of years ago Jez started developing a personal assistant. He heard of Alexa, Siri, Google Assistant and other similar platforms and services and launched his own version to understand a bit more how it all works. By adopting the already existing technology, he managed to generate his own ideas and create unique software.

‘The hardest part of coding is coming up with an idea. When you get stuck, you are struggling for inspiration. We’ve all been there. Don’t try to invent the wheel. I always advise my students to build something that already exists.’

Jez admits that this project was also an attempt to challenge himself. He often initiates various activities to keep his brain thinking and learn by doing.

‘I think three quarters of coding is not done on computer. It’s all about thinking, and preparing, and planning. The actual writing of the code is, actually, a very small fraction of it. This project was perfect for me because it was from a cold start. I didn’t understand how things worked in that respect and I had to figure it out myself.’

Jez’s students also engage with his project and help him make it even better. The students act as testers because they are constantly trying to break what the teacher has written and truly enjoy the process.

‘That’s brilliant. It just ensures that I make more robust software. It also teaches the pupils how to test what they make. I teach them how to trace their tests using trace tables. Being able to test software and document the outcomes is a good skill in itself. I can see that look on their faces when they do find something wrong with what I’ve written, ‘We’ve broken your software, Sir.’

Over time the project has seen a remarkable growth and turned into Cass v1, a chatbot that can be trained for specific purposes. It has already been used in art installations in the UK and Germany. The US coders are also adapting it to help stroke victims gain some movement back into their hands. One of the schools in Salisbury looks at Cass v1 as a potential safeguarding app that offers helpful advice based on certain topics discussed by the pupils. Children are under great pressure these days and Cass can be a tool to provide them with help and support.

Jez uses his project in the classroom to teach coding. He shows his pupils how to build a basic framework so that later on they can develop their own. His students have produced interactive quizzes and even a tourist app for Salisbury. This app chats with you and learns about your hobbies and interests on the basis of which it recommends certain places to visit.

Feedback played a crucial role in the development of Cass v1. Jez shared his earlier versions of the software on the Internet and gradually improved it due to the suggestions provided by the online peer community.

‘That’s the power of the Internet. I always tell my pupils there’s never been a better time to learn something new. In my day I had to go to the library, if I wanted to find something out. It was so difficult to make a community back then. Nowadays everything is instant and I think that’s incredible. People have no excuse not to learn something new these days.’

Today teachers have to adapt to the accelerated growth of technology and bring it into their classrooms. Drawing upon his experience, Jez says that there is a definite lack of confidence among teachers in implementing new technology. Apart from that, they struggle with the abundance of EdTech tools by choosing numerous platforms and not using them to their full potential.

‘There’s a lot of free and open source software out there, which does the job just as well. Pick a platform and get really good at using it, get confident.’

Jez Whitworth stresses that remote learning seems to become increasingly popular in the future. It is something that he always wanted to try. That is the reason why Jez joined TeachPitch Digital Skills program and we are happy to have such an experienced and dedicated teacher in our community.